How Long-Term Investors Can Be Optimistic When Others are Negative

The optimistic contrarian is the rarest of investors.

Right now, there are no shortage of reasons for many investors to be pessimistic.

The good news is that you all don’t need to be.

Not just because I believe central bank hawkishness has reached its peak.

But because nobody here owns crypto or the overvalued tech stocks that have borne the brunt of the broader market drubbing lately. Our energy strategies are performing very well year-to-date, too. More on that in my next Tarpon letter.

Still, reading all the headlines of late may make you think the market can’t catch a break.

After what had already been a difficult start to the year, the most recent GDP report confirmed that economic growth slowed for the first time since the pandemic began. And then the combination of high inflation, a slowing economy in China, higher interest rates, faster Fed tightening and the implosion of a number of cryptocurrencies have driven the S&P 500 back into correction territory and the Nasdaq into a bear market.

As uncomfortable as it may be to watch that carnage in the tech and crypto markets unfold – and increase the short-term volatility in our own holdings – let’s consider it a periodic reminder that staying invested is difficult. The very definition of investing involves sacrificing what we could buy and consume today in order to achieve more tomorrow. And having the fortitude to stick it out when times are tough is exactly why long-term investors are rewarded.

Occasionally, there are times when investing seems easy and all prices rise, regardless of risk – such as over the past few years, or during the dot-com boom. When those kinds of periods inevitably end, it becomes clear which investors were truly following a disciplined approach and which were just following trends.

While investors would prefer a smooth ride, with steady gains day after day, that is, unfortunately, not how the market works. At all. Instead, the price of long-term gains is the ability to stomach short-term declines.

The temptation to focus on short-term trading at the expense of long-term investing is a powerful one. For those investing for retirement and other important goals, it can be especially challenging during periods of market unease. Similarly, for those focused on cryptocurrencies, NFTs, and other new assets, rising prices over the past few years created a fear of missing out. Which was made worse by a never-ending deluge of social media posts touting how easy it is to turn a thousand dollars into a million.

One of the most important principles of investing is to take advantage of the power of compounding. It’s a bit unclear whether Albert Einstein actually uttered a quote often attributed to him – “Compound interest is the eighth wonder of the world.” But whoever first said it, the idea is simple: as your portfolio generates returns, those returns create additional gains, and so on. This eventually leads to not just linear returns but exponential growth. And that phenomenon is what creates real wealth.

And in that sense, I suppose there is some truth to those social media posts.

What they neglect to mention, though…is that the key ingredient is time.

Financial markets are inherently volatile over days and weeks. When looked at solely on a daily basis, the stock market is almost no better than a coin flip, rising only slightly more than 50% of the time – and down days tend to be much worse than up days. That can be frustrating to investors who expect the stock market to consistently rise and achieve its 30-year average total return of 11.5% in any given year.

However, even a coin flip that is very slightly in an investor’s favor, when compounded over longer time frames, can generate mind-blowingly positive results. On a monthly basis, the stock market has risen more than 60% of the time, going back three decades. On an annual basis, that percentage jumps to 70%. So, staying invested is often the best approach. And I believe this is one of those times.

Now, value investing principles are at odds with how many of today’s investors view stock markets, meme stocks, and newer asset classes. Investing as a way to generate an easy buck, especially via get-rich-quick schemes or crypto or hot stock tips, is as old as money itself. It’s for that reason that Benjamin Graham, the godfather of value investing, distinguished between investing and speculating. The goal of speculation is to generate short-term gains, often based on limited “research.” Unfortunately, stories of sudden and immediate wealth are what naturally attract attention and interest.

The biggest hurdle to achieving financial goals is not about predicting geopolitics, modeling interest rates or forecasting the Fed – it’s overcoming your own biases and emotions.

Like many things, the power of compounding works slowly and positive returns over any individual day, week or month are never guaranteed. Market pullbacks and corrections may grab attention and headlines, but it’s the slow building of wealth in the face of never-ending market fear that works in investors’ favor over the course of years and decades.

While there are valid market concerns around the business cycle, inflation, interest rates, the Fed, and more, the bottom line is that U.S. economic growth is still robust. So patience, discipline and perspective are going to be needed as this business cycle matures.

The most recent GDP report confirmed that U.S. economic growth slowed for the first time since the pandemic began. However, there was also positive news beneath the surface that could matter more in the months, quarters and years ahead.

That report for the first three months of the year showed that the country’s gross domestic product shrank by 1.4% on an annualized, quarter-over-quarter basis. This simply means that there was less spending in some parts of the economy last quarter. While this was a negative surprise, even the 1% growth rate that economists had expected prior to the report would have been a deceleration. The other drags on that number were already well-known, too – high inflation and energy prices, rising rates, Fed rate hikes, and the war in Ukraine.

Under the surface, there were actually some positive signs in that GDP report. Consumer spending grew 2.7% even after adjusting for inflation. And while economic growth slowed compared to the previous quarter, it still rose 4.3% when compared to the prior year. It was mostly a decline in government spending, a worsening trade deficit and changes to business inventories that made overall GDP negative last quarter – factors that may self-correct before too long.

Still, the negative headline number has naturally raised concerns over a possible recession. Recessions are formally defined as two consecutive quarters of negative growth. However, the organization that officially decides recession dates, the National Bureau of Economic Research, considers a variety of economic data. Fortunately, these data on balance still look robust, even if not perfect. The job market in particular is exceptionally strong with unemployment of only 3.6% and wages for hourly workers rising 6.7%.

For long-term investors, what matters is not that the economy is perfect – it’s that overall growth will support corporate earnings and therefore equity returns. Companies are still doing well, in spite of high inflation and other sources of uncertainty, with an S&P 500 earnings-per-share estimate of $237 a year from now – a healthy level.

Incidentally, the market, too, is also sending a positive signal. The portion of it most related to the current angst, I mean.

The U.S. Treasury yield curve between two-year and ten-year notes has started to steepen – meaning interest rate traders have started to anticipate a slowdown in the business cycle that will bring inflation under control, and then encourage the central bank to start trimming interest rates to support growth later in 2023.

And that implied trajectory is consistent with inflation being under better control by mid-2023 and a “soft landing” – or a slowdown in the business cycle that will then enable the central bank to shift its focus to supporting growth again. A similar pattern occurred during previous interest rate tightening and “soft-landing” cycles in 1966-67 and again in 1994-95.

In other words, what the market is telling us is this: hold fast.

At least in the investments we hold here. I cannot speak to – nor do I have much empathy for – speculators in crypto and unprofitable, overvalued tech companies.

The U.S. economy is still growing, only at a slower rate than previously expected. The sliver lining, with a long enough time horizon, is that inflation should be contained. Though it will take some time. And while the Fed probably was a bit late in acting to cap that inflation, there is still time.

In terms of investment strategy – my forecast is that things will gradually get better over time.

And the perspective of this optimistic contrarian is that the U.S. economy will continue to grow at a steady pace, once we get over these near-term speed bumps.

None of this is meant to to ignore or downplay the challenges that may lie ahead for some investors. My point is that many of these challenges are already widely understood by other investors who have been grappling with them for months, if not years.

Below are three charts that may help frame some recent headlines. 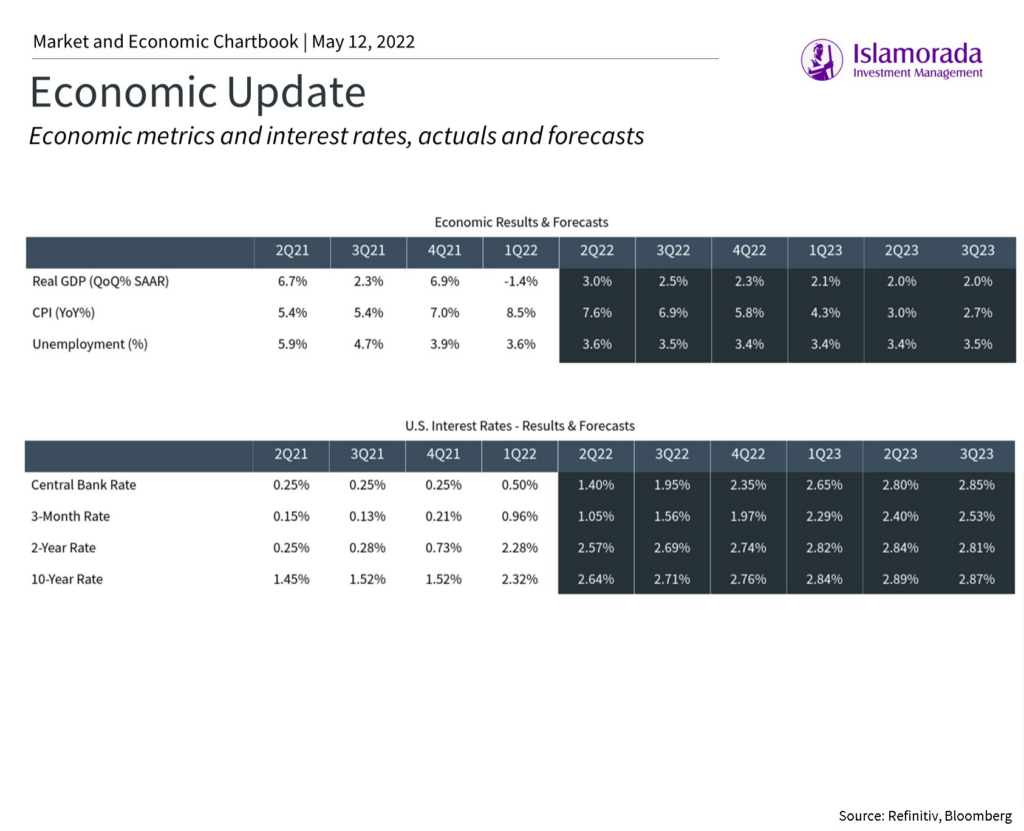 The negative GDP number for Q1 was driven by factors that are widely known. Economists expect steady but moderate growth in the coming quarters as the economy and world get back on track. This is the case despite inflationary concerns, Fed rate hikes, and more. Investors ought to focus on these long run trends and not a single three-month period.

2. Staying invested is the best way to manage challenging markets. 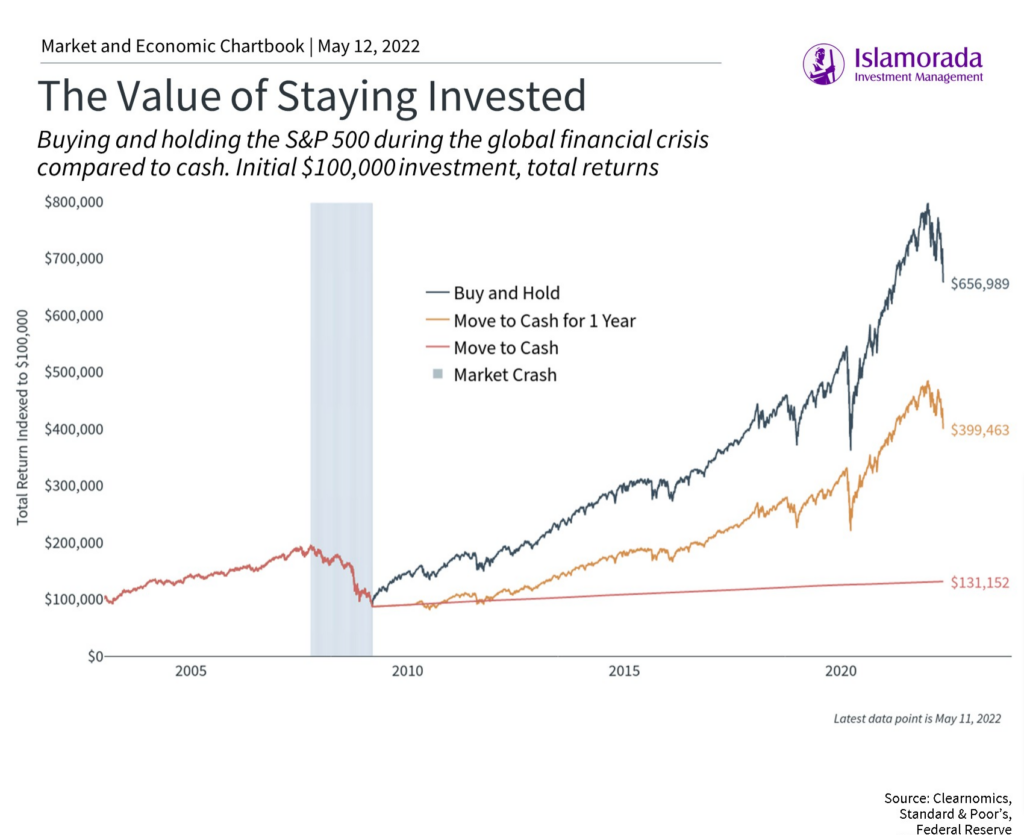 While the temptation to react to market events is natural, history shows that simply staying invested is often the better approach. This is because timing the market is hard if not impossible. Big down days are often followed by up days shortly thereafter. Trying to predict these day-to-day swings is unnecessary and often counterproductive.

3. In the long run, fundamentals are what matter. 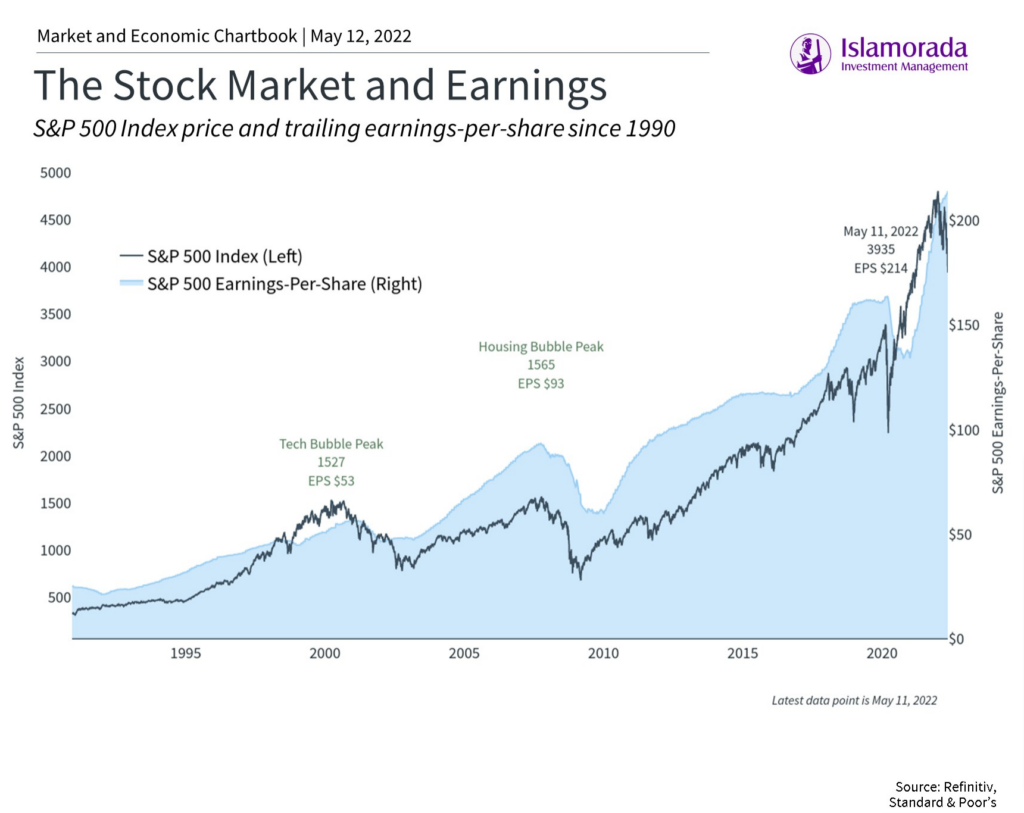 Over the course of years and decades, fundamentals like valuations and earnings matter much more than daily headlines on the Fed, individual stocks, politics and more. The strength of the economy, fueled by business innovation and consumer spending, have propelled the stock market forward cycle after cycle.

The bottom line? Although this market is challenging, staying invested to achieve financial goals is worth the short-term discomfort.

Thank you for the patience, and please let me know if you have any questions.