Gravity or gravitation is the force that attracts anything with mass or energy to one another. It’s kind of important; it keeps we human beings grounded.
Although global equity markets don’t meet the physics definition of mass or energy, most succumbed late in the quarter to the gravitational forces of the ongoing fight against COVID-19, China property debacles, supply-chain interruptions, inflation fears and Washington DC budget deadlocks.

But financial gravity didn’t have an equal pull on all sectors and markets; indeed; in the US, the energy sector was the only one in September that was positive. For more information on the oil phenomena, please see Cale Smith’s letter at www.islainvest.com. On the other hand, growth stocks like Facebook and Adobe took huge hits for the month. Emerging markets were drug down by Brazil, Korea and China, but even within this space gravity played favorites as India and Russia did well. Emerging markets drug down international markets in general, which continued to lag the US for the year. Value and Growth stock traded places during the year, but Value indices were ahead in most categories by then end of the third quarter. 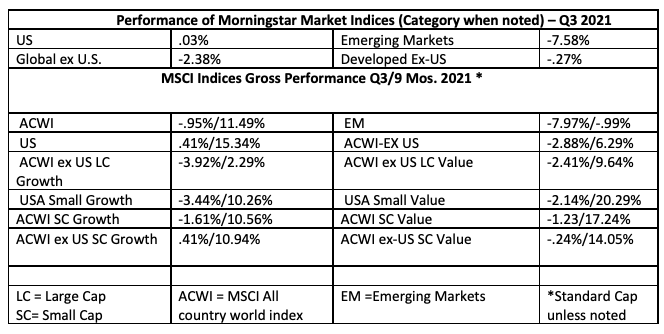 The phenomena of capricious gravity impacted our international Folios in different ways. Pharmaceutical and technology stock were among Frigate’s best performers over the past nine months. Among the former, Merck KGaA saw strong growth in its Fertility and Oncology franchises and its Healthcare, Life Sciences and Electronics divisions year-over-year. In addition, Novo Nordisk’s GLP-1 therapies for treating diabetes drove sales growth including the roll-out of Rybelsus, which was also approved as Wegovy for obesity. Indian companies Wipro and Infosys continued to benefit from the global demand for IT service providers.

On the other healthcare hand, the share prices of medical supply company Smith and Nephew and plasma derivative producer Grifols did not do well. Certainly the pandemic hasn’t helped either company, but in the case of Smith and Nephew there appeared to be concerns of eroding market share in joints; and for Grifols, investors appeared uneasy over the $1 billion equity investment by GIC, the sovereign wealth fund of Singapore. Staffing company Adecco slumped despite reporting improving 2nd quarter earnings, at which time it cancelled its share buy-back program and announced the acquisition of AKKA. The share price continued to falter as it announced in September the acquisition of QAPA and an equity offering of 232.29 million euros.

In my opinion, all three of these laggards are enduring some short-term pain for longer-term gain. During the year, rising prices led to trims of stocks such as Adidas and Infosys that were deployed into adds of enterprise software company SAP and Smith and Nephew and into new positions in UK pharmaceutical company Astrazeneca and Netherlands chemical company Akzo. This year Frigate struggled versus its benchmark, which had a much higher weight in Canada and Energy. According to Folio, since inception Frigate has yielded an accumulated gross return of 80.87% versus an estimated 60.02% for its benchmark.

In Treasure Harbor, the outstanding performers were pretty eclectic, but led by Pembina Pipeline which provides transportation and midstream services for the energy industry and ASE Technology which assembles and tests semiconductors. Deutsche Post, the global mail and logistics company, was also a top performer as it raised earnings guidance throughout the year. The Spanish utility Iberdrola continued to be the significant detractor of performance as the implementation of a windfall tax seems more likely and has led Iberdrola to pull back from bidding for new renewable projects in Spain; the stock is on my priority review list. Underperformers of a lesser degree include diversified miner BHP and Ambev, the largest brewer in Latin America.

Treasure Harbor was in recovery mode this year as its members resumed dividend payments and valuations remained reasonable. Trading was limited to trimming luxury provider LVMH, adding to personal care manufacturer Unilever and telecommunications company Vodafone and initiating a position in the insurance company AXA. Folio estimates Treasure Harbor’s cumulative performance at 31.7%. versus its benchmark performance estimated at 15.94%.

Japanese stocks ASG (Asahi Glass) and device and machined components supplier Minebea were strong performers in Yellowtail – both especially benefitted from demand from the auto industry. French Virbac, which manufactures and sells pharmaceuticals for companion and food-producing animals, also did well. French-based IT services provider ATOS remained the largest drag on Yellowtail; in addition to dealing with restatements of its US businesses, investors were not happy that Atos cuts its 2021 financial targets, although it is keeping its medium-term targets. In-vitro diagnostic manufacturer BioMerieux gave back some of its gains achieved during height of the pandemic last year, although its business model remains attractive for the long-run. Dealing with higher commodity and transport prices and tough comparisons with the compulsive buying last year, EBRO Food’s half-year earnings on operations were down slightly as was the performance of its share price.

Currency was the biggest drag on performance with the strengthening dollar creating over 500 basis points of negative translation. Yellowtail’s currency exposure is locked-in, if I trim a stock I either have to hold the currency or deploy it into a another position. Within Switzerland, specialized manufacturers Bucher and George Fischer were trimmed, security hardware provider Dorma Kaba was added to and positions in flooring system manufacturer Forbo and food retailer Valora were initiated. In Europe, market research firm Ipsos was trimmed, nutrition provider Glanbia was added to and a position in specialty pharmaceutical Ipsen was initiated. In Japan, Minebea was trimmed, and the ADR for the Foschini Group, a retailer based in South Africa was added. The changes and new positions had a mixed impact on performance. Since inception Yellowtail has an estimated cumulative return of 66.31% after trading fees and taxes versus 64.14% for its benchmark.

As we proceed in this last quarter, different parts of the market and individual stocks are still fighting gravity. It’s quite likely that we will see sector and market rotation for the rest of the year; a situation that typically offers your IIM investment managers good opportunities.

Please don’t hesitate to reach out with questions about our Spoke Funds or individual securities we own.

(i) Performance figures are estimated and unaudited. Estimated Benchmark Returns are in the column to the right of its respective Folio. Net Returns are after international taxes on dividends, management fees and trading fees, when necessary. Historical returns are available on request and at Callan and Investment Metrics.
(ii) Gross Return
(iii) Benchmark is 15% SPDR S&P Emerging Markets Dividend ETF + 85% SPDR S&P International Dividend ETF. Total return estimated after taxes on distribution.
(iv) Benchmark is Vanguard FTSE All-World ex-US Small-Cap ETF. Total return based on NAV.

Disclaimer: This post nor any of the material linked to herein in any way constitutes investment advice. Historical performance data above represents performance results as reported by the portfolio identified. Performance results are for illustration purposes only. Historical results are not indicative of future performance. Positive returns are not guaranteed. Individual results will vary depending on market conditions and timing of initial investment. Investing may cause capital loss. The publication of this performance data is in no way a solicitation or offer to sell securities or investment advisory services.