IIM International Portfolios: First Half of 2021

The Light at the End of the Tunnel

There appears to be a light at the end of the pandemic tunnel, at least in certain parts of the US. According to USA Facts, by July 14 of this year 56% of the population had received at least one vaccine dose and 49% of the population have been fully vaccinated. According to healthdata.org, Pfizer’s and Moderna vaccine have over 90% efficacy in preventing disease caused by early variants of coronavirus and over 85% efficacy in preventing infection. Even for later variants, these vaccines are showing over 80% effectiveness in presenting disease and over 75% in preventing infection. In general, in the US and in countries where effective vaccines are available and increasingly administered, the number of new Covid-19 cases reported have dropped significantly; but the vaccination rates are very variable across and within nations leading to longer tunnels for some populations.

In general, though, increased vaccination, the reopening of businesses and pick-up in travel bolstered equity markets throughout the first half of this year, although rotation favored geographies, sectors, styles and capitalizations at different rates and times. Examining index returns can be tricky, but In general, US markets continued to lead foreign markets during the second quarter. The second quarter favored growth stocks but value stocks outperformed in domestic and international markets and across capitalizations for the first half of 2021. 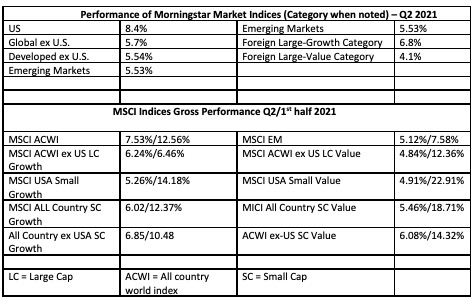 In Frigate Indian Wipro and Infosys, riding the strong growth in the IT service industry, were strong performers for the first half of 2021. Swiss ABB, a supplier of electrical equipment and automation products was close behind. The largest detractors in US terms were Komatsu, the world’s second-largest construction equipment manufacturer, and Takeda, Japan’s largest pharmaceutical company – in their domestic market their returns were close to flat. Still fighting pandemic headwinds, Grifols, a producer of plasma-based products also lagged; although the share price improved in the second quarter. On a relative basis, Frigate, our ADR Folio focused on capital appreciation, suffered from its low exposure to both Canada and energy stocks. According to our custodian Folio, Frigate has delivered a cumulative, gross return since inception of 87.03% versus an estimated benchmark return of 66.78%.

In general Treasure Harbor, our ADR Folio focused on dividend yields, benefitted from the reinstatement of dividends suspended during the height of COVID-19. The largest performers turned out to be pretty eclectic, including: Canadian Pembina Pipeline, Deutsche Post and Taiwanese ASE, a semiconductor firm. The biggest detractor to performance was Iberdola – the largest Spanish utility with the largest onshore wind portfolio. Spain’s council of ministers is contemplating a windfall tax on carbon-free power plants installed before 2005; this would not be a good windfall for Iberdrola. Other companies with much smaller negative impacts were Singapore Telecomm and UK plastic packaging manufacturer Amcor. Folio has estimated the cumulative, gross return of Treasure Harbor of 36.1% since inception, versus an estimated benchmark return of 18.11%.

Three of the best performing companies in Yellowtail, which invests in international SMID stocks, were Swiss. Two of them: Sulzer, which manufactures pumping solutions and other products for energy and other markets, and Georg Fischer AG, which supplies plastic and piping systems and other products for the transportation of liquids and gas, benefitted from higher energy prices. The third was EFG International, which offers private banking and asset management services. Atos, French IT services provider, was the startling detractor as it works through accounting irregularities in two of its US entities. Fairly defensive Spanish Ebro Foods and Swiss glass manufacturing Vetropack were among the few negative stock performers in Yellowtail. Currency was the biggest hurdle Yellowtail faced; the strengthening dollar shaved off over 300 basis points of performance for the first half of the year. Since inception, Yellowtail has an estimated cumulative return after trading fees and taxes of 67.16% versus 66.39% estimated for its benchmark.

Equities did well the first half, but it is quite possible that some markets, if not all, will take a breather the second half. The light at the end of tunnel isn’t visible in emerging markets with low vaccination rates and even dimming in the US as more virulent variants of the COVID-19 spread quickly. As I write, some health districts, such as Southern Nevada, are recommending that even those vaccinated wear masks in crowded indoor spaces, and Los Angeles is requiring everyone to wear masks indoors. There are therapeutics undergoing testing that appear to offer protection against the spread of the Delta variant; but until current and more protective options are available around the world; we are all going to be in the tunnel.

So please, for the sake of your health and that of your investment portfolio, whether you are vaccinated or not, talk to a trusted healthcare professional about steps you should be taken to protect yourself and those you love. Maybe we can all exit this tunnel together.

(i) Performance figures are estimated and unaudited. Estimated Benchmark Returns are in the column to the right of its respective Folio. Net Returns are after international taxes on dividends, management fees and trading fees, when necessary. Historical returns are available on request and at Callan and Investment Metrics.
(ii) Gross Return
(iii) Benchmark is 15% SPDR S&P Emerging Markets Dividend ETF + 85% SPDR S&P International Dividend ETF. Total return estimated after taxes on distribution.
(iv) Benchmark is Vanguard FTSE All-World ex-US Small-Cap ETF. Total return based on price.

Disclaimer: This post nor any of the material linked to herein in any way constitutes investment advice. Historical performance data above represents performance results as reported by the portfolio identified. Performance results are for illustration purposes only. Historical results are not indicative of future performance. Positive returns are not guaranteed. Individual results will vary depending on market conditions and timing of initial investment. Investing may cause capital loss. The publication of this performance data is in no way a solicitation or offer to sell securities or investment advisory services.